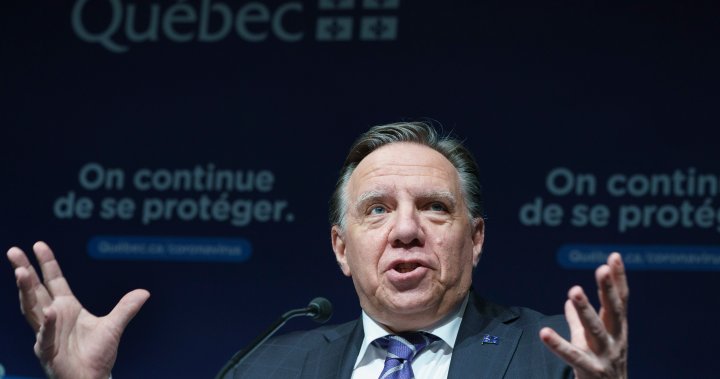 The premier of Quebec and his Minister of Health defended their decision on Wednesday to impose compulsory vaccination on healthcare workers, even as an opposition party and several unions urged them to extend the deadline to avoid possible service failures.

As of last week, some 7,000 frontline health workers were still unvaccinated and could be suspended without pay after the government-set Oct. 15 deadline.

Jeff Begley, the leader of the Federation of Health and Social Services Unions, said with less than two weeks of the deadline, most unions still have very few details on the government’s plan to deal with to the impending staff shortage.

He said he understands officials want to wait until the last minute for up-to-date vaccination rates before unveiling the plan, but said the lack of information adds more stress to health workers who are already. exhausted for a year and a half of the fight against the pandemic.

“I hope that at the local level, employers understand how the employees are at the end of their rope,” he said in a telephone interview.

Parti QuÃ©bÃ©cois leader Paul St-Pierre Plamondon held a press conference on Wednesday alongside five other health union leaders, urging the government to extend the deadline to avoid a “widespread disruption of services.”

Health Minister Christian DubÃ© said last week that he had asked all regional health networks to submit a plan by October 1 on how to deal with a possible shortage of staff after October 15, but he has yet to release the details.

On Wednesday, Plamondon and union leaders blasted the government for its lack of transparency and called on the Legault government to explain how the province would avoid service disruptions in an already understaffed and overwhelmed health network.

Prime Minister FranÃ§ois Legault defended the mandatory vaccination plan on Wednesday, incredulous that anyone questions the idea that healthcare workers who treat patients should be vaccinated.

“I think he is sending a very bad message with his question this morning, suggesting that it would be a mistake to put compulsory vaccination in the health network on October 15,” said Legault in response to a question from Health spokesperson for the Parti QuÃ©bÃ©cois. .

Although Legault acknowledged that the province is short of nurses, he maintained that there was currently “no disruption in services” and that the plan would be executed in a safe manner. He said only five of 1,000 health facilities have suspended some services, such as obstetrics, but he said patients can get these services elsewhere.

1:54
Calls are increasing for Quebec to extend the deadline for mandatory vaccination for health workers

About 20,000 health workers in Quebec are still not fully immunized as mandate approaches

DubÃ©, in a hurry to clarify his plan on how to deal with the possible loss of staff, said the health network was working to reorganize schedules in light of the deadline.

He also maintained that the government had taken measures to address the shortage of personnel, pointing to a project announced earlier this week that will allow certain paramedics to work in emergency rooms on the South Shore of Montreal.

“I think we are taking concrete steps every day, Mr. President, and we will continue to do so,” he said.

Begley said the vaccination rate among workers he supervises is high overall – over 95 percent – but lower in some areas, such as east of Montreal.

He said keeping services fully in lower-rate areas would likely involve either forcing workers to do jobs they don’t usually do, or asking already overwhelmed staff to work even harder.

“It seems impossible to me that there are no places in Quebec where there will not be a disruption of services,” said Begley, who said he would have preferred the government to postpone the date. vaccination limit to give workers more time to get both shots.

But as some union leaders expressed concerns over the vaccination deadline, a long-term care home owner said his fears had been allayed.

Paul Arbec, head of a group representing private care homes and chairman of Groupe Arbec, had previously expressed concern about the Oct. 15 deadline, but said on Wednesday he changed his tone after seeing how the warrant had helped convince most of the remaining reluctant employees to get vaccinated.

In an email, he said his group was still at risk of losing “a few employees per establishment” as a result of the tenure, but felt he had a solid contingency plan and would be able to recruit enough staff. new people to maintain the services.

Meanwhile, Quebec reported 506 new cases of COVID-19 on Wednesday and three more deaths attributed to the new coronavirus. Health officials said hospitalizations related to COVID-19 increased by three, to 294, while the number of people in intensive care remained stable at 90.

Officials said an additional 8,846 doses of COVID-19 vaccines were given on Tuesday, including 5,267 second doses.