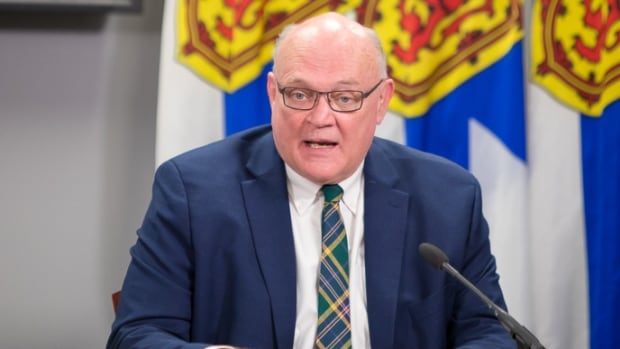 Members of the Nova Scotia legislature have unanimously agreed to fast-track a bill introduced Thursday afternoon that will ban protests near the homes of health care workers and public officials in decision-making roles in matter of health.

The lieutenant governor signed the bill later in the day, amending the Protecting Access to Health Services Act to create a 50-meter “safe zone” around homes.

Nova Scotia Justice Minister Brad Johns said a video posted by a protester this week outside Fall River, Nova Scotia, the home of chief medical officer Dr Robert Strang, prompted him to ask his staff to draft an amendment to the law passed in the fall. .

“It became clear that someone had to do something,” Johns told reporters during a briefing on the bill at Province House on Thursday. He said the decision was initiated by the Justice Department, not Strang.

Police this week charged Jeremy Mitchell MacKenzie, 36, and Morgan May Guptill, 31, with criminal harassment, mischief, harassing phone calls and intimidation of a medical professional, after three days of protests outside Strang’s home. They are due in court on Friday.

Under the amendment, demonstrations will be banned in the 50m “bubbles”. Violators will be subject to fines ranging from $5,000 to $100,000. Hospitals, clinics and other health facilities are currently protected by law.

“People can’t be allowed to stalk others outside of their homes,” Johns said. “Not only are our health service providers threatened, harassed and intimidated, but so are those they share a home with, their wives, children, husbands or loved ones.

“They and their loved ones deserve protection. It’s very un-Nova Scotian.”

Turning a bill into law in just hours, with almost no debate, is very rare, but Johns defended the move as necessary to protect Strang and his family.

“Given the fact that a number of people showed up three days in a row, I thought it was important to get it passed so it could take effect immediately,” Johns told reporters after the interview. third and final reading of the bill during the first day. of the spring session.

Johns said he had no qualms about bypassing the law amendments committee, the part of the legislative process where the public has a say in proposed legislation.

“I think the general public won’t have a problem with these amendments,” he said. “I think most people would be very supportive of that and would understand that.

“I have no problem with that.”

“Not in this case,” Rankin said. “In this case it’s about safety and if we can stop people getting hurt or taking actions they shouldn’t, we need to do that as soon as possible.”

“I think in this case we were convinced that this bill was needed in an expeditious manner and that there were active threats against public officials and that, you know, there was a feeling that legislation was needed. stronger to be able to deal with this and keep people safe,” Chender said.

She said if expanding protective bubbles to thousands of healthcare workers has unintended consequences, her party would push the Houston government to make the necessary changes to fix the problem.