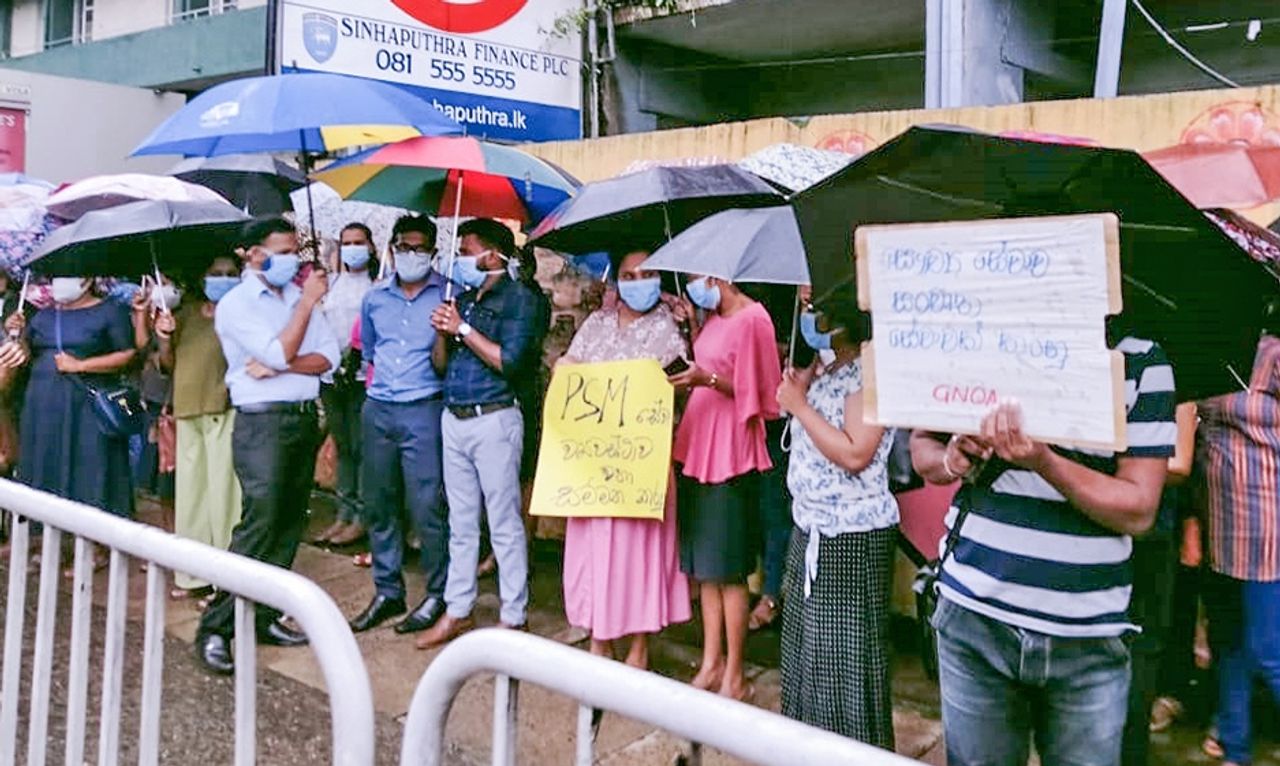 More than 50,000 Sri Lankan health workers on strike for increased wages and benefits

More than 50,000 public sector health workers in Sri Lanka staged a two-day sick leave strike on November 24 and 25 to protest the government’s repeated rejection of their demands. Nurses, additional and interim health workers and laboratory technicians were involved in the national campaign.

According to the Health Professionals Collective (HPC), an alliance of several unions, workers from 1,100 hospitals and 365 medical health services offices were involved in the walkout.

The central demands included the rectification of the salary anomalies recommended by the report of the Ranugge Wages Commission, an increase in monthly allowances for night duty, higher transport and on-call allowances (by Rs 3,000 [$US15] 10,000 rupees), better overtime rates and better promotion procedures. If the recommendations of the commission’s report are implemented, the monthly salaries of health workers are expected to increase from Rs 3,000 to Rs 5,000.

The action last week was the third by public sector health workers in the past three weeks, including a sick leave campaign on November 9 and a mass protest outside the health ministry on November 17.

The Government Nursing Officers Union (GNOU) said on its Facebook page that the November 9 protest was intended to remind the government that it had pledged in its budget later in the week to respond to demands from public health officials. The union warned that there would be other measures if they were not granted.

The GNOU and other health sector unions have previously used bogus government promises as a pretext to block or cancel industrial action. While the HPC called for action last week in an attempt to allay growing anger among health workers, the mass response underscores the determination of workers to fight the government.

Two days before the strike, Health Minister Keheliya Rambukwella had a discussion with the United Public Service Nurses Union (PSUNU) in an attempt to undermine the sick leave strike. The PSUNU is not part of the HPC.

Rambukwella falsely promised PSUNU leader Muruththettuwe Ananda, who is a Buddhist monk, that the government will increase some allowances and overtime payment rates when the government budget is implemented.

While the PSUNU did not participate in the action last week, most of its members were involved in the strike. The HPC said it would hold another protest on Wednesday.

Despite various tactical differences between the unions in the health sector, all peddle the illusion that the government can be pressured into acceding to workers’ demands.

During last week’s strike, HPC leader Ravi Kumudesh made a pathetic appeal to President Gotabhaya Rajapakse, stating that “the token strike could have been easily avoided had the health authorities been flexible enough to listen to us” . He then pleaded with the President, the Prime Minister and the Minister of Health “to step in and fix this problem.” Don’t let it get worse and bother people.

The fears of Kumudesh and the rest of the health sector union bureaucracy are that the struggle of health workers will become a focal point for other sections of the working class, bringing them into direct political confrontation with the government.

The past few weeks have been marked by strikes and protests by teachers, port workers, oil and electricity workers, and plantation workers, while today tens of thousands of other workers in the public sector start a weeklong industrial campaign and protest for higher wages. These struggles are part of a growing wave of union action by workers at the international level.

Last week, the Health Workers Action Committee (HWAC), an independent grassroots organization of health workers initiated by the Socialist Equality Party, intervened in the protests, distributing a statement on the agenda needed to move the fight forward.

â€œThis year alone, the number of campaigns convened by the unions of health workers exceeds 25. The unions that called for these actions – separately or collectively – did not serve the interests of the workers but betrayed them, while serving the workers. government needs, â€the statement said.

“In presenting his severe austerity budget, Finance Minister Basil Rajapakse said: ‘The public sector is an unbearable burden’ and added:”[F]or at least a year more, there is absolutely no way to spend public money on public sector employees. True to these statements, the government has now launched a fierce attack on the public sector, including health services.

â€œThe government has cut Rs 6 billion from the health sector for 2022, from its allocation for 2021. As COVID-19 continues to spread, spending next year for the sector struggling to control the deadly virus were reduced by 6 billion rupees â€” from 18 billion rupees to 12 billion rupees.

â€œAmid a growing number of coronavirus cases and an insufficient number of employees, the difficult conditions we already faced have worsened and we are now facing further increases in the cost of living because the government removed price controls on basic necessities. Like all other workers and the poor, we face common problems and must be involved in a common fight to defend living and social conditions, â€the statement said.

The HWAC statement called for:

The statement added: â€œIn fighting for these demands, health workers must turn to and unite with workers in other sectors. In order to challenge and defeat the government’s austerity attacks, we need a political agenda.

â€œThe unions function as an industrial police force for the government because it does all it can to defend and stimulate the profit system.

â€œWe need to create action committees, independent of unions, in every workplace, which will allow us to reach out to other struggling workers and our international class brothers and sisters.

â€œWe are advancing a program that fights for the reorganization of production according to human needs and not for the benefit of a few. It is a political program based on the struggle for international socialism.

Emphasizing the need for united working class action, a nurse from Gampola hospital said: â€œIf we are fighting, we must unite and start a struggle. Strikes and campaigns must be organized on a correct schedule. We cannot win our demands by union demonstrations, which only limit us. “

A nurse from the same hospital said that the unions were the main obstacle to the unification of the working class. â€œThe unions betray our struggles because they want to avoid any collision with the capitalist class. Health workers still face the same problems as 25 years ago, problems that unions have not solved.

A mental health nurse from Kandy National Hospital said: â€œEven though the paltry amount demanded by the unions is granted, we cannot live on it today. Every worker needs a wage increase sufficient to make a decent living.

Sign up for the WSWS newsletter for healthcare workers!