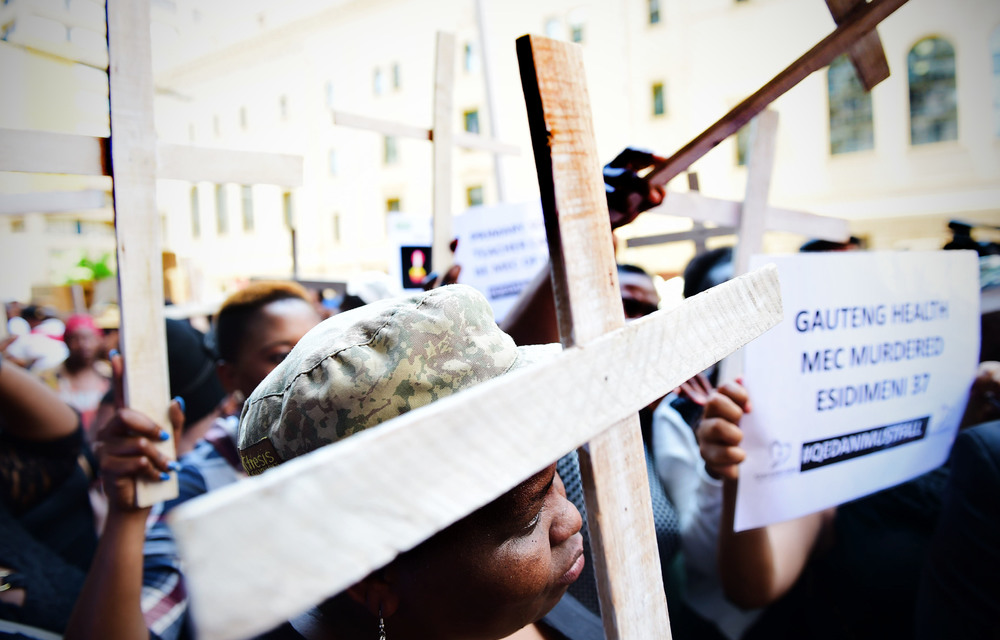 A little over three years ago, on March 18, 2018, Judge Dikgang Moseneke ordered the government to financially compensate the victims and families of the Life Esidimeni tragedy in which 144 people died in mental institutions. . The judge also ordered that the dead be commemorated.

To date, 6.5 million rand out of the budgeted 120 million rand has been paid. While the families directly involved in the arbitration have been compensated, others are still waiting. “The difficulty according to the Prime Minister’s Office is that they are vetting the candidates and will not pay until this happens,” Democratic Health Alliance spokesman Jack Bloom said.

The families of the victims were determined to want mental health services for the living rather than a war memorial. “We want a center of life, where we can be assured that people with mental illness are taken care of. Our request was that in each region there must be a large clinic where people with signs of mental illness can be referred, ”said Christine Nxumalo, whose sister died in the tragedy. If there is early detection, she said, people can be treated before they need to be institutionalized. “It was agreed, but nothing happened,” Nxumalo said.

In November 2017, the South African Human Rights Commission (SAHRC) convened a national consultative hearing on the state of mental health care in South Africa. Although catalyzed by the Esidimeni tragedy, the objective of the hearing was to capture “a picture of the lived experiences of all people with psychosocial and intellectual disabilities in South Africa” and the impact of systemic, social, cultural, political and economic concerns that affect mental health and the realization of human rights.

Numerous human rights violations were brought to light during the investigation. They arise, according to the commission, from “the systemic and prolonged neglect of mental health at the level of the implementation of policies”. The lack of resources and the lack of professional expertise in the sector were the result of “the failure of the system to protect and promote the rights of this group,” the commission concluded.

International best practices show that governments should start investing in community mental health services and general hospital psychiatry, while reducing support for existing free-standing hospitals, said Lesley Robertson, a psychiatrist who was part of the group of experts for the Life Patients Esidimeni death investigation.

The National mental health policy framework and 2013-2020 strategic plan was produced in 2012 with the aim of integrating mental health into general health services so that people in need of treatment can access services at the community level. But the plan was not implemented, apparently because no budget was made available.

The South African Society of Psychiatrists informed the SAHRC that there was a severe shortage of psychiatrists in the country and that the limited community care available for people with psychosocial and intellectual disabilities was under-resourced. At the governance level, “dysfunctional or absent” mental health directorates and mental health review committees are widespread, and there are very few services for children and adolescents.

The SAHRC has prioritized the implementation of the mental health policy framework by national and provincial governments. The commission suggested a budget approach that takes into account the prevalence of mental illness with a particular focus on rural communities to ensure that budgets are not concentrated in urban areas and directed only to psychiatric facilities.

The facilities are in very poor condition

South Africa has 22 dedicated institutions, most of which were built before 1910. There are significant variations in the availability, adequacy and condition of facilities from province to province, although the overall image acquired during the SAHRC investigation is very negative.

One of the main recommendations of the SAHRC was the creation of a standing committee by the Ministry of Health. The standing committee recently held its first meeting, said Cassey Chambers, who represents the South African Group on Depression and Anxiety (SADAG).

“They visited mental health services – mainly hospitals and clinics – in all provinces during the lockdown and it’s incredibly scary,” Chambers said. “Life Esidimeni has highlighted all the problems in Gauteng, but here we have provincial data on what is available and what is happening: substandard facilities or hospitals with no facilities and no professionals. It is very worrying. This will be the key document that will guide [the] SADAG’s advocacy for the year.

Specific recommendations were made for each province, including the implementation of the strategic mental health plan, the drafting of budgets, the creation and staffing of the necessary institutions and the improvement of services in prisons and institutions. psychiatric establishments which have always been under-prioritized.

The commission presented the results of its investigation in the provinces to the Esidimeni Parliamentary Commission on Justice and Corrections in December 2020. The findings included financial mismanagement and lack of accountability; dilapidated, unsanitary and dangerous installations due to a lack of maintenance by the public works department; no security measures; a lack of mental health care services; no facilities for teens; and chronic staff shortages.

Not a single institution inspected by the commission had a fire alarm, and the majority did not have anti-theft bars on windows or secure fencing. In the new De Aar hospital in the North Cape, the commission was shown an isolation room to house psychiatric patients where the air conditioner was broken and the windows were not fitted with anti-theft bars.

Most of the hospitals visited by the commission did not have dedicated mental health patient services and in psychiatric hospitals across the country there were not enough beds. The CEO of Kimberley Mental Health Hospital confirmed that the hospital only had one wing in operation due to a lack of staff and equipment, including beds. The commission learned that it takes an excessive amount of time to transfer psychiatric patients from the 72-hour observation wards to the psychiatric hospital due to the insufficient number of beds.

Across the country, there was a glaring lack of facilities for teens, although incidents of mental illness and suicide in the 15 to 25 age group are increasing every year. According to the South African Society of Psychiatrists, nearly one in 10 teenage deaths is the result of suicide and up to 20% of high school students have attempted suicide.

Staff shortages were evident at all facilities, including the new facilities visited by the commission. The result has been overworked and tired staff, low morale, and patients not receiving proper care.

In Kimberley, state-certified patients are being kept in prison due to understaffing. This situation is not confined to a single province. Patients with mental disorders incarcerated in prisons received special attention from the SAHRC. The commission was informed that 4,304 mental health care users were in the correctional system in 2017. It was also found that the state of mental health services is particularly poor in the criminal justice, forensic and justice systems. correctional system in South Africa.

Without the buy-in and collaboration of different sectors of government, the human rights of people with mental illness will continue to be ignored and the necessary investment in mental health will not take place.

“At the end of the day,” Freeman said, “it might not be the part of the health budget spent that will make the big difference, but the part of social development. [on grants and other services], housing, transportation, labor and other expenses – and that cumulative amount – that will really matter. Mental health cannot simply be a health issue and a responsibility.

This article was first published by New frame.

‘A tribute to all concerned’: Waterford mental health facilities hailed…