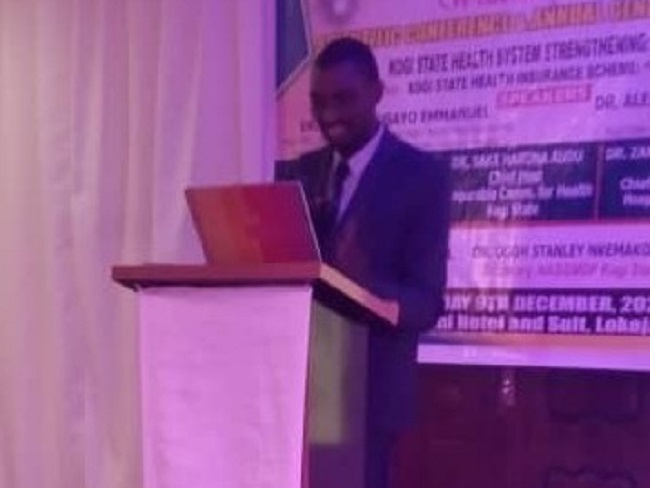 Dr Agbana Emmanuel made this known at the 2021 Scientific Conference and Annual General Meeting (AGA) of the National Association of General Practitioners, Physicians and Dentists (NAGGMDP) held in Lokoja, on the theme: “Strengthening the health system in Kogi State: where are we?”,

He revealed that the state currently has 4,216 health workers including 69 in the medical category, nine consultants and 2,012 registered nurses.

He commended the Kogi government for the ongoing improvement in health service delivery in the state.

Dr Agbana Emmanuel, who presented a paper on the topic, said Kogi is currently doing well in his healthcare delivery services.

The doctor praised the state government’s approval of the full COMMESS for all doctors under its services, describing the development as a positive impetus to stabilize the health sector in the state.

According to him, Kogi currently has four tertiary health facilities, three of which are owned by the state and one by the federal government, and has embarked on the expansion of existing health facilities and the modernization of specialist hospitals.

Emmanuel stressed that the theme of the 2021 AGM is to assess Kogi’s health system, contributions, processes and results so far.

Earlier, NAGGMDP State President Dr Okaungbowa Osaretin Kelvin, in his welcoming address, said the association’s AGM remains an annual ritual where professionals in government medical services come together to reflect on the success, challenges and the way forward in practice.

He said the association’s new leadership in Kogi had made significant and verifiable progress within a year in office.

He acknowledged the support and encouragement from members and past presidents of the association as well as parent body Nigeria Medical Association (NMA) to the new leadership.

The NAGGMDP chairman called on the government to hire more doctors, as the few available doctors were already overworked, and also called for organizing leadership training for doctors.

The Executive Secretary noted that the Medicare scheme was established in Nigeria in 1999 and in Kogi State in 2019, saying it was a feat to provide social health insurance to all Nigerians.

He revealed that so far his agency had been able to deploy staff to administer the program in Kogi State, capacity building of staff on universal health coverage, development of operational guidelines, accreditation of 50 secondary health care establishments and 236 primary health care establishments. Care facilities for the provision of services.

For his part, the Chief Medical Director (CMD) of the Kogi Hospital Management Board, Dr Zakari Usman, assured that the state government will continue to give top priority to the health sector.

The CMD thanked the NAGGMDP for its efforts to support the government in its task of meeting the health needs of the population.

Also speaking, the President of Kogi State of the Nigerian Medical Association (NMA), Dr Simeon Omakoji Oyiguh, called on governments at all levels and Nigerians to beware of growing insecurity across the country .

He called for joint efforts in tackling the insecurity that has left innocent citizens killed.

Oyiguh commended the state government for its determined efforts to secure the lives of residents and increase their health needs.

The highlight of the occasion was the presentation of awards to deserving physicians for making their mark in their professional appeals.

YOU MUST NOT MISS THESE TITLES NIGERIAN TRIBUNE

Buhari urges MTN to offer quality service, downgrading the cost of data and other services