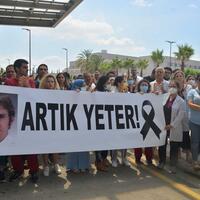 Following the murder of Ekrem Karakaya, a doctor in Konya province, central Anatolia, on July 6, nearly a thousand doctors and health workers gathered in the hospital garden to protest against armed attack, with some demanding faster and stricter action to prevent violence against healthcare workers.

After the funeral prayer in absentia, the crowd gathered in the garden of the hospital and staged a protest sit-in outside the emergency room for some time.

“Everyone loved him,” said Arzu Tarakçı, a colleague from Karakaya working at the same hospital.

Karakaya was an honest and dignified person who was admired by all, with his professional and ethical manner, his compassion for his patients and his hard work, according to Tarakçı.

“His murder in such a horrific way is shocking to all of us, I cannot describe our grief. We don’t want to relive that pain again,” she added.

“The service received from the health system by people who are prone to violence and who have been involved in violence before may be limited by the government,” said Özlenen Özkan, rector of Akdeniz University in the province. southern Antalya, adding that they are in mourning. the loss of their colleague, Karakaya.

Hacı Mehmet Akçay shot and killed Karakaya with a pistol on July 6.

Akçay, who allegedly carried out the murder because he blamed Karakaya for the death of his mother, Kezban Akçay, who died of a heart attack a month ago, killed himself with the same weapon after the attack.

President Recep Tayyip Erdoğan expressed his condolences to the doctor’s family by telephone.