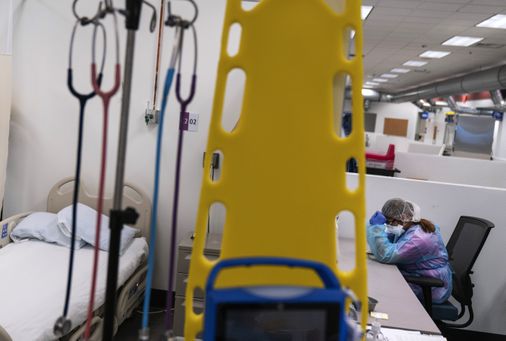 With COVID cases soaring in Rhode Island and the health case management system already critically understaffed, they might not be the last.

Osterholm said the United States was currently facing a “viral blizzard”. Hospitals, nursing homes and other health care facilities will face tough choices, he said: Do you have someone who is infected with COVID-19 but wears an N95 mask at the bedside? a patient, or do you have no one at all? Even non-healthcare establishments will be faced with these choices: What will happen to medical supply manufacturers in the event of an outbreak?

“It’s a sad situation we find ourselves in, but thank God there are healthcare workers who are willing to do this, with the idea that the greatest good is to try to save the lives of these patients and at the same time trying to minimize any risk,” Osterholm said. “Over the next 10 days, many places will make the same choice as Rhode Island. It’s not a question of if, it’s is a matter of when and how much.

Rhode Island facilities that pass this milestone are, if nothing else, a regional exception.

Massachusetts guidelines do not even consider these levels of crisis care, and no hospitals use them, according to the Commonwealth Department of Public Health and the Massachusetts Health and Hospital Association. Maine has adopted guidelines that would allow healthcare facilities to use these crisis standards, but none are, the state’s Center for Disease Control and Prevention said. Health officials in Vermont, Connecticut and New Hampshire did not respond to questions about it.

Experts interviewed for this story said earlier this week that they don’t know anywhere else this is happening right now. But it’s hard to gauge policies in all 50 states, and one report said an Akron-based chain of hospitals had also taken that step. The two largest hospital chains in Rhode Island – Lifespan Corp. and Care New England – aren’t there yet, but they don’t forcefully rule it out either.

That means it’s rare, but not unprecedented, in the United States, which the Centers for Disease Control and Prevention recommends as a last resort. These recommendations, which were updated at the end of December, outline what to do if a healthcare worker becomes ill.

There are three levels. In conventional situations, the worker must remain absent for 10 days, or seven days if he tests negative. In emergency situations, healthcare workers must stay away for five days, returning to work if they have no symptoms or if their symptoms improve. In crisis situations, there are no restrictions on COVID-positive workers, although employers should prioritize asymptomatic or mildly symptomatic workers.

Rhode Island adopted much of those guidelines last week, along with the “crisis” standards verbatim. But he did not adopt the CDC’s “conventional” guidelines for 10 days of isolation. Instead, he said that in any situation, even conventional ones, workers could return after five days if their symptoms had cleared or were clearing up. No one would argue that what hospitals are currently dealing with in Rhode Island is conventional, with emergency physicians describing the system as “collapsing.”

Eleanor Slater Hospital and the Rhode Island Respiratory and Rehabilitation Center went into crisis mode soon after. (Eleanor Slater is licensed as an acute long-term care hospital. This is not where a patient would go immediately after a car accident, but where a patient could go if a car accident left him permanently disabled. Patients stay there for years, decades. There are also psychiatric establishments.)

Eleanor Slater Hospital said it used two asymptomatic COVID-positive staff on Saturday and three on Monday. A family member of one patient told the Globe that she was not told about it, and the hospital did not mention it until later on its website. Eleanor Slater was the last health care facility in the state to stop using unvaccinated workers and one of the first to start using COVID-positive workers.

Eleanor Slater Hospital declined to say Wednesday how many patients there are currently infected with COVID.

According to a Dec. 29 notice obtained by The Boston Globe, the facility notified families that it was entering “crisis” staffing levels, but the notice did not explicitly say that meant a positive worker at COVID would be there. .

The drawbacks of this approach are profound, experts say.

“There are certainly situations where COVID-positive staff are better than no staff (especially if they are asymptomatic, vaccinated and caring for COVID-positive patients),” said Dr. Megan Ranney, Associate Dean at Brown University School of Public Health. and a Rhode Island emergency physician, said in an email. “But this crisis standard could be misused in many ways – and could harm both workers and patients.”

Going into crisis mode will be up to hospitals and nursing homes, but they must report it to the state and post information about it. Many hospitals across the state were already in emergency mode and considering crisis mode, state health department official Dr. James McDonald told health care providers during a call on December 29.

“We try to minimize that as much as possible,” McDonald said. “Obviously we prefer that COVID positive people not work. As you can see, we are going through a very difficult time in our state right now. »

McDonald said hospitals should try to ensure that COVID-positive workers only care for COVID-positive patients. Right now, the entire healthcare infrastructure, the entire workforce, is threatened by the fast-spreading Omicron variant.

In addition to potentially spreading the virus, however, the use of COVID-positive workers could actually exacerbate staffing issues, as healthy workers may resist working alongside infected colleagues.

“I think the idea of ​​using even masked and vaccinated COVID-positive people in this setting, especially with such an infectious variant as Omicron, is hard to justify,” said epidemiologist Dr Chris Beyrer. at Johns Hopkins Bloomberg School. of public health, said in an interview. He later added: “It is also true that we all expect that if we go to the emergency room we will be treated. And the idea that it wouldn’t is really difficult.

Maryland, Beyrer noted, had taken a number of steps to address its own personnel crisis, including bringing in the National Guard and removing interstate licensing requirements. One thing the health care system in the United States needs to think about adopting is “task shifting,” which is the way AIDS care is delivered in parts of Africa. Task shifting occurs when people with a lower level of training take on higher level tasks. Nurses, not doctors, provide much of the HIV and AIDS care in parts of Africa. They do it effectively.

“We’re not used to thinking and operating that way,” Beyrer said, “but we haven’t had this kind of threat and challenge to our healthcare system in 100 years.”