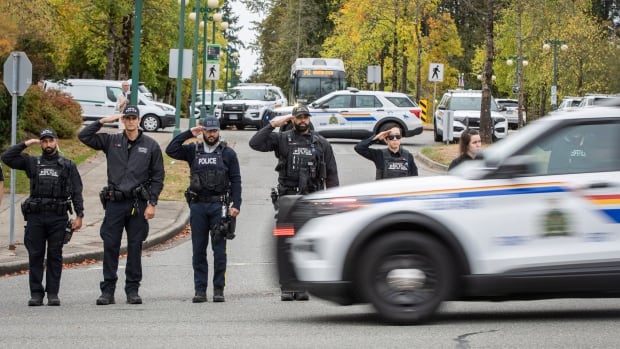 Cities in British Columbia’s Lower Mainland are asking their local health authority and the province to support police officers who respond to dozens of mental health calls every day.

The mayors of Burnaby and Coquitlam have both asked Fraser Health to provide mental health professionals to accompany police on mental health calls, similar to programs established in other cities in British Columbia.

On October 18, Const. Shaelyn Yang, who also went by her first name, Tzu-Hsin, was stabbed to death while responding to a call about a tent at a local park. According to the Integrated Homicide Investigation Team, she had gone with a city employee to inform the man inside that he would not be allowed to continue living there.

Jongwon Ham, 37, has since been charged with first degree murder. Ham was wanted on a previous assault charge at the time of his arrest.

Yang worked with the Burnaby RCMP’s Mental Health and Outreach Team (PMHOT), which is made up of three officers who work with community agencies on mental health and homelessness issues.

In an interview with The Canadian Press, Sgt. Steve Addison of the Vancouver Police Department said the police have become de facto social workers for people who lack support services while battling homelessness, mental illness and addiction, which could put them in potentially dangerous situations.

Addison said “police by default” is increasingly the reality for people who have no place to live or the help they need for mental health issues that keep them in encampments that have tend to be moved from place to place.

“We see people living with this constellation of very complex social issues that not only make them dangerous, but make other people dangerous,” he said.

As part of a mental health outreach program known as Car 87, the Vancouver Police Department pairs an undercover officer with a registered nurse or registered psychiatric nurse who assesses or provides community referrals for people living with mental illness. The program began in 1978.

Police are also partnering with an outreach team from Vancouver Coastal Health to deal with people with more complex mental health needs where a history of violence may be involved, Addison said.

The City of Burnaby says it first approached Fraser Health about a similar Car 87 partnership in late 2019.

Their request was denied.

But earlier this year, the city and the RCMP renewed the request, and the city says those conversations are ongoing.

“It’s something we have to get,” Mayor Mike Hurley said. “I’m past being nice to it. We’re struggling. This situation just keeps getting worse.”

The nearby city of Coquitlam asked for similar support, but was told Fraser Health was unable to help.

“The back seat of a police cruiser is for suspects, not patients,” Mayor Richard Stewart said, noting the city needs more support for mental health calls so people don’t get confused. not found in police cars.

sergeant. Chris Manseau of the BC RCMP says the RCMP is “very supportive” of a collaborative approach to mental health appeals.

Advocates have long called for mental health professionals, including social workers and nurses, to be involved in mental health-related calls to the police.

“At some point we’re going to see another tragedy directly attributable to this kind of process happening,” Stewart said.

A Fraser Health spokesperson said the health authority is working with law enforcement in several communities on different types of initiatives, including case management, treatment and homelessness response teams. shelter.

“We are committed to continuing to work closely with local law enforcement to reduce the risk of harm for people who have mental health and addictions issues and to support people without housing, including connecting them to health and social services,” Fraser Health said in a statement. statement.

The province did not respond to a request for comment by the deadline.